The farther one travels, the less one knows.... ?

I've created this blog as a motivation to reflect on my experiences of the past year, and since I've taken hundreds of pictures it's a waste to keep them guarded away in my computer. I want to revisit my memories and think about them in a more thorough way, through writing, so that they don't just fade away.

I promised myself a while back to concentrate more on living, rather than journalling or taking pictures or otherwise extricating myself from the given situation, as is my habit. And for that reason I took a lot fewer photos than I could have, and plus being in Guatemala and southern Mexico people are either more sensitive to having their picture taken and cover their faces or they see it as an opportunity to make a buck. Or if you're five years old, a cookie. 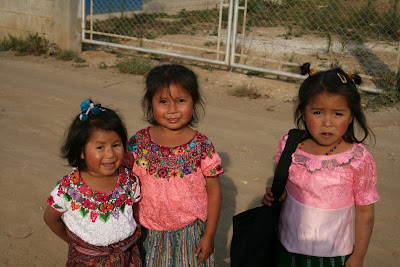 This is one of the first pictures I took in Guatemala, in a little aldea outside of Antigua. They were walking home from school (the one on the right has her school supplies with her, donated by a charity). Two months later I returned to the same village and saw the little one on the left on the bus, this time with her parents, happy because she had a lollypop in her mouth, sticking her head out the window like a puppy.