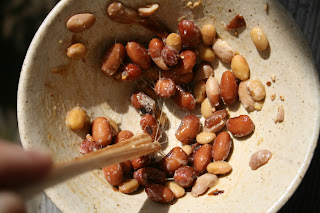 See those stinky strands? That's what I was going for. I took it out after about 16 hours fermenting. Probably could have kept it in a bit longer but it was fine. Stirred up with some soy sauce, wasabi, sesame seeds, and scallion over rice it was a pretty good breakfast. 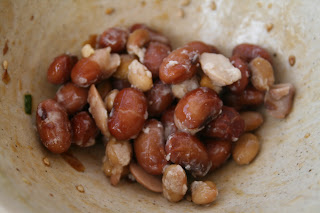 The white stuff is the natto bacteria.

I was a little worried last night when Midori was walking around the big room looking for where the dog pooped. But it was just the natto.
Posted by Anna at 9:38 PM No comments:

I have someone very special to introduce to you. His name is Okudo-san, and he is my birthday present from Gen this year. He's got 3 eyes. When he gets hot, smoke shoots out the top of his head. He may sound strange but he's very helpful, especially around lunchtime....

The day before my birthday I caught Gen and Midori discussing my birthday present in Japanese, but again, I managed to crack the code... it was going to be either a fancy electric oven or a sewing machine. Fortunately Gen saved me from both those daunting appliances and proposed that we spend my birthday together, not doing whatever it is most normal couples do on their birthday, but working.

Which suited me just fine. Except for the part where we get in an argument on whether or not to put a chimney on the thing, and the whole working together idea went out the window. Which also suited me just fine. Anyhow, cement isn't the kind of stuff that can wait a half hour when you've got a hungry baby to nurse...

So here he is, all finished. See his face? And his 3rd eye? 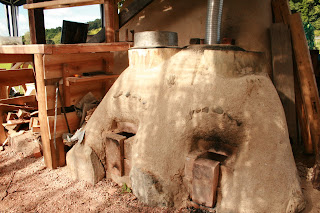 He's been making lots of rice and noodles. Sometimes I'll put a wok on his head and he makes vegetables for us too. He even helped me do some water-bath canning. I love him. Thank you Gen, it's probably the nicest thing I've ever gotten for my birthday. And I'm even glad you gave him a chimney (that's removable. Heh.)

In other news, I did some experimenting pickling green beans in the leftover juice from umeboshi. We put up maybe 40 quarts of umeboshi (pickled Japanese apricots) back in June. They're a pretty incredible food, especially since right off the tree they are toxic. After salting them, they start oozing juice and eventually they are bobbing around in their own fluids. Then you put in a little red shiso to turn them pink. Somewhere in this process they become edible. Put them in the center of your white rice and you've got the Japanese flag. They are reputedly healthy, though it's hard to understand why, since they are extremely salty and sour. Corrosive, actually. Which is why I thought the juice might make for good pickling liquid. I'm bored with dilly beans, and we have too many to eat, thanks to Jen's green thumb. 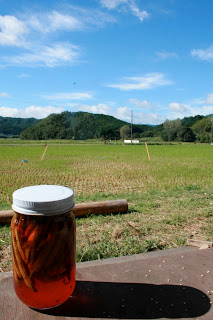 I stuffed a jar with beans, put the juice on to boil, poured it in the jar, then boiled it in a water bath for ten minutes. The beans got all shriveldy and lost their vivid color, and it looks like they're floating in kool-ade. I'll leave them alone a while before I make someone else try them.

Lunchtime. Okudo-san's eyes are fired up. Rice, green beans and tofu and Korean spicy miso, stir-fried komatsuna, and cabbage and tomato slaw. What, no mayo? We'll try making our own, thank you Mark Bittman, this took about 30 seconds to make in the food processor. And it's sooo good, especially after eating MSG-laced Kewpie mayo (which does have it's merits) for the past year and a half. Mmm. I'm dipping radishes, tomatoes, and green beans in it right now.

Then I prepped some soybeans by boiling them til soft for an experimental batch of natto. Apparently, all you need to do to make it is get a package of store-bought natto, mix it up with your hot soybeans, and keep it at around 115 degrees for 24 hours, but it must be ventilated because it needs oxygen to ferment properly. I'm trying to do it in my new dehydrator (another awesome birthday present-- thanks Mom & Dad). 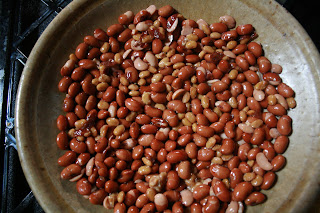 I guess I'd better explain natto a little... it's fermented soybeans which, when stirred, become super sticky and slimy and stringy. When you try to put it in your mouth it leaves lots of little spiderwebs hanging from your chopsticks and then the wind catches it and it gets all over you. And it smells like feet, or cheese, or something gross like that. It's delicious, especially over rice. But not for food wusses. And, like umeboshi, is also supposed to be good for you, packed with blood-thinning enzymes, vitamin K, and it also helps you absorb calcium.
Posted by Anna at 7:58 AM 2 comments:

Breakfast around here is either pretty sad or it's fantastic. Not much in-between. On the sad days it's leftovers, if there are any, maybe a container of natto, and maybe a cup of coffee. If we've got it together it's homemade bread with butter and plum jam, homemade stove-top granola and homemade yogurt, homemade English muffins or these pancakes, which we eat a few times a week, after we've run out of bread. You make the batter the night before and it rises in the fridge, so when you wake up all you have to do it heat up a pan and fry up your cakes. For me it's easier to get stuff like this done at night when my brain awake enough to measure ingredients, and the baby is usually asleep then too so I've got my hands free.

I like to use all whole wheat flour. The stuff Midori orders is much finer than any whole wheat flour I've had in the US. Sometimes if we've got leftover grains like brown rice, oatmeal, or buckwheat I'll throw it in for texture, plus whatever else I feel like, maybe raisins. The original recipe calls for milk, but I usually use water. I've even done it without eggs as well, it's a bit less tender but still works.

Mix the dry ingredients in a container, then add the wet ingredients and mix until just combined, a few lumps are okay. Put on the lid and keep in the fridge overnight. In the morning stir it down and fry over medium-low heat, no higher, or else they will burn burn burn.
Posted by Anna at 8:55 AM 2 comments:

corn and the bean

I love Mexican food. I spent a while down there and fell in love with beans with epazote, real tacos, tlayudas, mole oaxaqueño, chiles en nogada.... the list goes on.

Trouble is, I'm in Japan. You can't even buy fake Mexican food here, let alone cornmeal or black beans (and leave it to me to try to make frijoles out of black soybeans which turned out awfully weird, cause the soybeans have a really firm, meaty texture and they're very sweet, not exactly what I was going for. Not to mention black soybeans are about $20 a kilo.) So I decided I'd grow my own flour corn, grind it up into tortillas, plant a few pintos, and a miniature forest of cilantro. As I popped the seeds into the ground, I had a visions of grilled, spiced venison on hot, fragrant tortillas, topped with some homemade queso and a spritz of sudachi lime with a side of beans.  Mmm. Imagining the food you're going to eat seems to make the work go by faster.

The beans I seem to have planted too early. They got pretty wet during the rainy season and plus having a baby when I should have been weeding didn't help things either. Then they got slayed by an errant WWOOFer with a weed whacker. So no beans.

The Strawberry Corn did well, although it looks more like raspberries, but anyway I got maybe 10 ears out of it. They're cute little nubbins, kind of annoying to pick off the cob, but it makes tasty popcorn with an incredibly light, crispy texture even though it won't pop into big, fluffy flakes. Not sure what I'm doing wrong here.

The flour corns were a moderate success, and would have done a lot better had I planted more and gotten better pollination. It's neat to see what an un- or under-pollinated ear of corn looks like. The Wachichu Flint is a vibrant red color, the Hickory King is long, appealing, even rows of kernels that look like someone poked them with their thumbnail, and the Multi-color is a mix of indigo, red, cream, and yellow. If I make cornbread out of it it will look like mud.

I'm saving some for seed since I planted the Strawberry Corn paired with the Multi-colored Corn, and the Wachichu Flint paired with the Hickory King Kent. This means that next year I think I'll get some interesting hybrids. Will I get Rainbow Swirl Strawberry Corn and King Wachichu Flint Dent? I sure hope so. I'll have to read up on it in my favorite book ever, Breed Your Own Vegetable Varieties, by Carol Deppe, since I kind of forgot how corn breeding works.

And for the cilantro. I love the stuff, throwing it in salads, sprinkling it on soups, but I guess I got a little cilantro-happy and after putting it into the salad for about the 14th time in a row I caught Gen and Midori muttering to themselves in Japanese about how they didn't like the flavor of it but how it's better if they didn't tell me. But I am finally starting to get this whole Japanese thing, so I called them out on it and now we don't eat cilantro. It's not a totally sad story since I let it go to seed, and now the seed heads are waiting to be plucked and I'll grind them up in the coffee grinder and throw them in curry or falafel.

Here's the queen bean plus a sampling of my corn harvest. I know it's a weird photo but I hate uploading photos, it takes so long and I think it's posting photos that keeps me from blogging more often. Anyhow, it's mostly the Hickory King Dent plus a few ears of Strawberry Corn and Wachichu, and a bunch of ears that didn't get pollinated well.  You can see how the bugs liked it, which doesn't bother me near as much as raccoons or monkeys liking it. I'll take a few squishy little bugs any day over monkeys. I'm a little sore right now since they've taken to digging up all my sweet potatoes when I'm not looking. 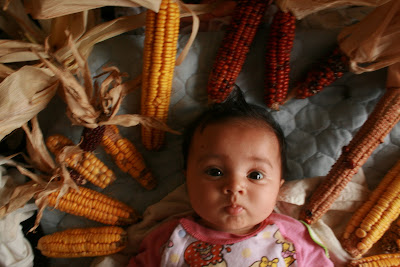