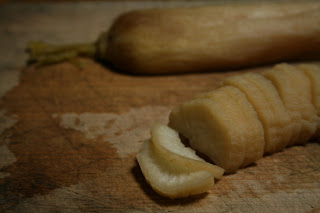 I guess it was December when the grandma down the road for us tottered over here with a wheelbarrow full of cute little daikon. I cut off the greens and Masa made some kind of delicious pickles with them that I wish I knew the recipe for. Probably something deceptively easy along the lines of mixing them with salt and stuffing them in a bucket and leaving them alone, and then knowing when they are ready and what to do with them.

As for the roots, I set them out to dry on the table outside, intending only to leave them for a few days but I got busy with other stuff. So they sat there for a few weeks, freezing every night and thawing in the morning. The idea is to dry them out just a little bit, so that they lose maybe 15% of their moisture. Finally around New Years I got around to rigging them up in the smoker and tried smoking them with pruned maple twigs, but it didn't work, or I wasn't paying enough attention or something, and I ended up using a few sawdust blocks, cherry I think. Again, I meant to have them in and out of the smoker in 24 hours but I forgot about them and they were there for another two weeks.

When I got around to making the takuan, Masa gave me a suspiciously vague recipe: Mix nuka (rice germ) with water until it's squishy, form a layer on the bottom of a bucket, and sprinkle it generously with salt (enough so that you can really see it on the surface). Then rub salt into the daikon and place on the bed of nuka, cover with more nuka and salt, then add another layer of salted daikon, until you reach the top. And every now and then throw in a few shards of kombu and dried chile peppers. Pat down the nuka and really cover the top with salt, otherwise mold will grow on it. Apparently you're supposed to put a weight on top at some point, but I neglected to do so and it doesn't seem to have messed anything up.

Then you just wait a month or so, and do a taste test. The daikon will have become really floppy and strong smelling from the nuka. Slice and eat with rice. Mine have started tasting really good just recently, after about 2 months, tangy, salty, mildly sweet, with a little effervescence on the tongue from the lacto-fermentation. One of our wwoofers told me I eat like a Grandma. Not sure exactly what that means. I guess it has something to do with liking traditional foods that are now considered quaint and that may happen to smell funny.
Posted by Anna at 10:02 AM